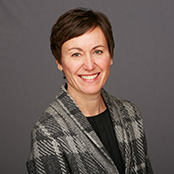 “If I had to use one value to characterize my team; it would be passion for integrity.”

Susan is responsible for leading FCT’s legal, compliance and government relations initiatives. In her role she consistently strives to think differently to create unique offerings for FCT customers, while ensuring that we operate in accordance with the relevant laws and regulations.

She joined FCT in 1998 and has held various prominent positions during her tenure. Prior to joining FCT, Susan was a sole practitioner in British Columbia. There, she practiced law primarily in the areas of real estate and wills. Before this, she practiced commercial litigation in Toronto.

Over the course of her career with FCT, Susan has been a frequent lecturer and spokesperson on the importance of title insurance and on fraud in the real estate and mortgage sectors.

Susan is a past executive member of CAMP (Citizens Against the Melville Pit), a local citizens’ group that formed to protect our natural environment in the face of proposed large-scale aggregate mining in the local area.